A while ago, I went out with a girl who was keen on folk music. We had a little arrangement, her and I, that we would take it in turns to entertain each other on ‘date’ nights. Now, being a lovely and thoughtful young man, I took the woman we shall call C to see Tender Trap with Cherry Coloured Pop Djing in Manchester. A slightly sweaty, but pop rush-y time was had by all. Then (then) came her turn to suggest an evening of frivolity. This turned out to be FOLK NIGHT.

She promised an entertaining evening where rustic fellows clang frothing caskets of ale together while singing heartily songs of yore while a shy young lady played a flute. What I got was quite different. Old men with bits of pork pie in their beards plucked and picked as they accompanied seemingly never ending ditties about children drowning in wells and lost loves called Rosie, whilst younger men (pork pie beard apprentices that carried the scent of sheds, wet wool and wanking) slapped the pub table with glee and apparent enthusiasm. I’ve had more fulfilling times at bus stops.

I’ve bored you with this tale of youthful excitement to perhaps illustrate my feelings towards the music known as ‘folk’. It was slightly concerning, then, to be asked to review a EP with a lead track entitled ‘Josefina’. Luckily, it’s really quite beautiful.

I say luckily because the artists involved are the wonderful A Little Orchestra, who you would probably know from their work with The Loves, Pocketbooks and the Pipettes and latterly with firm brilldream faves The Understudies. A band so seemingly lovely I was genuinely quite scared that they would be too hand-woven for my pop fuzz ears. But the EP is a treat.

The aforementioned lead track ’Josefina’ is sung by the sweet, slightly aching voice of Rachel from Model Village. This song is summer. Not Beach Boys summer or Ibiza summer, but a chilled glass of white in Whitby summer, as the sun starts to sink and you pull a cardy over your shoulders and think about how you’re going to spend you’re evening as you watch the sun set slowly over the harbour. That kind of summer. The song is effortlessly enchanting.

Elsewhere on the EP is ‘East Coast’, with it’s tinkling strings and dancing flutes flits Tinkerbell like around the sweetly blunt vocal out pouring of Ballboy’s Gordon McIntire.  “And the east coast night /And the summer haze/ Is all you'll ever need /Young men rise, old men fail But never really leave” he tells us.

“I want Julia in 1985 /Sheepskin coat, patterned tights /I want Julia and me to see a movie /One that makes me kiss her/ I never did” Lyrics like that could only belong to the tongue of Darren Hayman who stars on the keyboard led The Permanent Way, a track that sweetly and dreamily drags folk kicking it’s little heels into 2013.

The beauty of this EP (a 7” on brown vinyl) is it sweetens a style of music to such a degree that even dyed in the wool indie kids can enjoy it. I’m going to spend the beginning of the summer with this on the turn table, sat on the windowsill thoughtfully sipping at tea. The folk is alright, just don’t tell C. 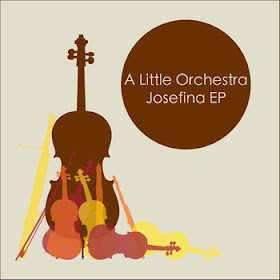 The Josefina EP (Elefant Records), is available now on limited edition chocolate-coloured 7″ vinyl from: http://alittleorchestra.bandcamp.com/ (you can stream some tracks too) for just £5. Expect it in the shops April 29th.
shaun brilldream at 17:29